I started this little gig as a web designer to step in and lend a hand building websites for a very grassroots, bootstrapped, under-resourced regional solidarity campaign. Five years later, I’ve learned a lot and made it into a little business, still working for some grassroots environment and social justice groups for free or for cheap, as well as for local community organisations and small businesses for reasonable rates.

Coming from this background working with some really small grassroots Aboriginal, West Papuan, Indonesian, East Timorese and Australian environment outfits, I took some key lessons into my new work

So despite being an overly opinionated and outspoken person, I’ve often been drawn to helping out in support roles, as camp cook, video editor, tech support, translator.

And being a kid of the 90s I guess I was inspired by the idea that sharing information, through Geocities, Indymedia, Myspace, Wikipedia, Youtube could help us build new, post-colonial networks, and this would somehow set us all free, as independent radio and newspaper networks had radically transformed the pacific region in the past.

So I guess these are some of the factors that drew me to web design, but mostly just filling a hole that it seemed not many other people where available to help in grassroots movements, not because I’m particularly good at it!

I started working for a bunch of campaign groups for free, and built up some skills that are worthy of charging for. I charged some community groups and small businesses for my work, and continued doing free work for some other causes that I’m passionate about. Those causes are mostly environmental. Because we can’t afford to lose our campaigns for a safe climate, I’ve been happy to work for them even if they can’t afford it.

But then also I noticed that my time as a skilled volunteer was often disrespected, I got stood up for meetings by paid campaign staff on the regular, people often asked me to do tech support for projects they had no real plan to implement themselves. So I started charging a nominal fee, or a reduced rate, to groups. I did notice some improvement and I thought that might work as an OK solution to make the most of my time.

I briefly tried building complicated online forms, to tease from people who they were and what they needed from me. But with the broad array of groups I work with and their very diverse needs, big and small, as well as their diverse understanding of online lingo, I found hard to filter their responses through a questionnaire.

But just now I realised that several of the groups that I’d been working for who have been terrible clients, uncommunicative, unclear what they want, not following through on plans, standing me up, have also turned out to be of a surprisingly liberal reformist bent (perhaps I’ll write more on that soon) . Clearly most people aren’t going to tick a box on a form that says ‘I’m a Liberal Reformist’. I just need a frame of reference to check with myself that I’m not getting ripped off by some people who want a free website which really should be funded by an established political party or by the marketing budget of what should actually be run as a business.

That doesn’t mean I’m not interested in your project, and I’d still like to work with you. I really believe that it takes all types to make a movement, but if your project is firmly within a capitalist paradigm, then you must accept that my time = your money, even though you’ve asked nicely. So here’s an attempt at putting this new frame into a diagram. 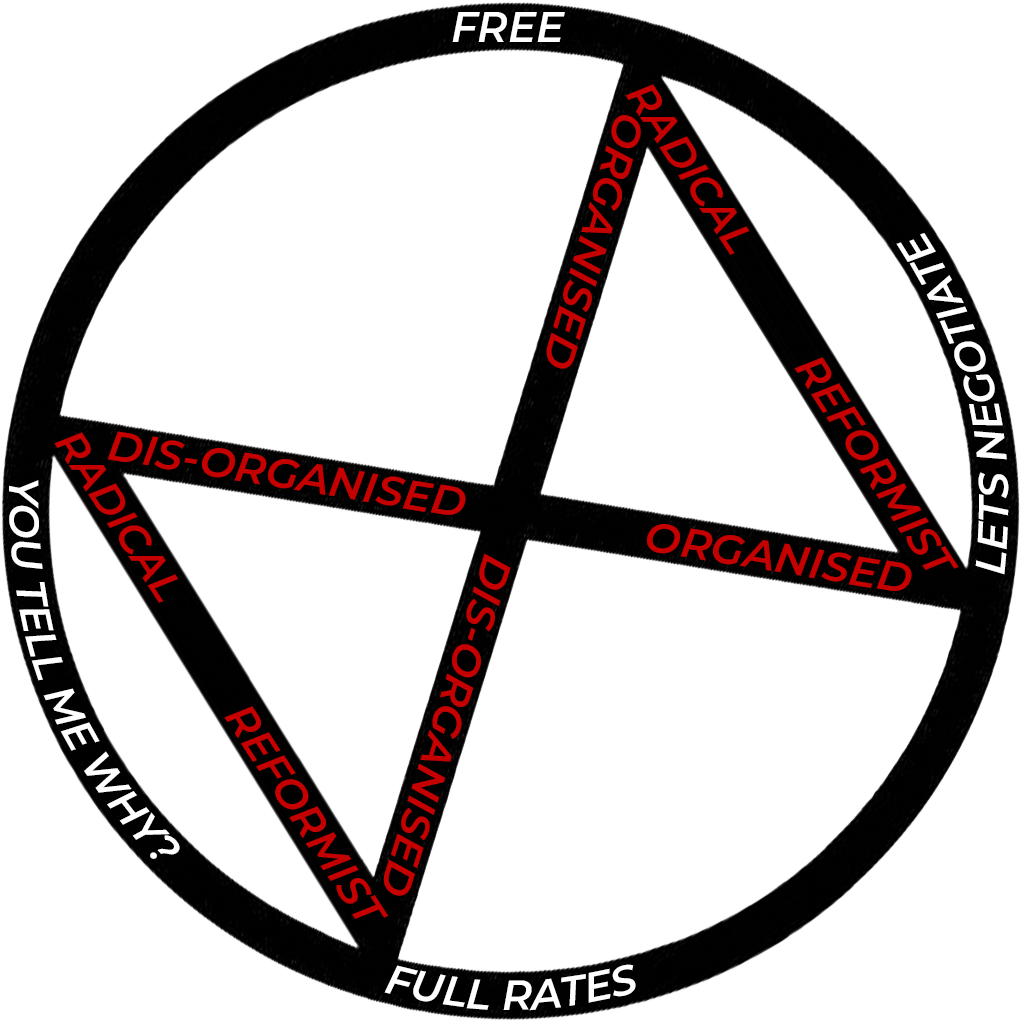 Firstly you’ll notice that the strange shape of this diagram is the Extinction Symbol. This is because I’ve begun to view everything through the lense of time that is rapidly running out for many species on this planet, including ourselves, so if you’re project broadly relates to preventing ecological collapse, making human communities sustainable and resilient, supporting groups that will be impacted disproportionately by climate change, even in a broad sense, then I’ll consider through this lens whether we can negotiate a price.

If the limited time we have left before a rapidly spiraling catastrophe is not being spent trying to flip that hourglass back the other way, then I better at least be getting paid at full commercial rates that can help me fund this other work.

On one plane of this nonsensically shaped graph, is a spectrum of radical to reformist.

Many people would define truly radical as the revolutionary overthrow of capitalism, many argue that we cannot seriously address climate change, and more broadly environmental collapse without doing so. While I might broadly agree, I’ll define radical very differently, as I believe any movement capable of effecting fundamental change is made up of a broad range of ideologies, strategies and tactics, and from many decentralised localities and contexts. Some characteristics I’d describe as radical

On the other end of the spectrum is reformist

I’m sorry its really hard for me to define what a radical and a reformist is and I haven’t read enough books to know who has? If you get what I mean but can define this better please let me know.

My point is that I’m all for every kind of tactic and strategy happening in tandem all at once, but know that change never happens without radicals pushing the boundaries. I also know that a big pull towards reformism and away from radicalism is campaigners needing wages and funding. I think that can sometimes be problematic but its also entirely understandable. But if you’re a paid activist, think about whether you’re also pulling the people you get to volunteer for you towards reformism, but without giving them the paycheck? Or can you instead resource them, do the boring admin, policy and website work and free them up to run amok?

On the other plane is organised <> disorganised.

There are a lot of things that I would bundle into this broad definition of organised. I’ll list a lot of things, but don’t worry, if you tick half of them you’d be doing better than most groups I’ve worked with, including myself sometimes! Signs that groups looking for websites are organised:

There are more, which I’ll probably add over time. The opposite is pretty much true for disorganised groups, so I won’t list that.

The reason I think its useful to include these things in the same frame as radical<>reformist, is that its a lot easier to have a strategy and a plan to win when your goal is ‘install solar panels on X number of roofs’ than it is when your goal is ‘justice and asylum for climate refugees’. Its a lot easier to have time to write a brief, turn up to meetings and reply to emails, when you work for an established (and therefore usually more reformist) organisation and have paid staff, than when you have bail conditions and fines to pay from your last direct action. Decision making processes are also easier when you’re basically the one in charge, compared with organising in big, marginalised communities.

So that’s why I’ve still got time to give for disorganised radicals, as well as organised reformists, who are working towards flipping or tipping this hourglass of extinction on its side, but I’ll preference the former. Talk to me, if you’ve got funds, use them, if you don’t we can negotiate and probably I’ll give you great free advice.

You’ll notice that the hourglass is also a bit skewed to the side – in the corner of organised radicals, its not totally pointing to free – if your group has funds, please do pay me! I’ll be able to spend more time on your project, work to your deadlines, and I’ll do a better job. In the corner of disorganised reformists, well maybe you can tell me why I should charge you less than full commercial rates, and I’ll listen, or maybe you really just need that really tiny thing done or some advice and you’ll shout the beer.

So this is my super non-scientific, and non-absolute method of working out whether I can offer a discount. Its definitely clunky trying to define this stuff and I’m heaps up for better suggestions – I need a clearer way to not get burnt by people who are getting paid wages stuffing me around, and still to be totally available to do whatever I can to help out in a movement for survival, justice, as well as having fun doing it.

This is a work in progress, and I’m curious how you work this stuff out, how do you decide what projects to volunteer your time for? And do you know how to make a graph with 3 or more planes? Cause that one  doesn’t actually make all that much sense!

Get Updates from Back to Front Design